Saludos, todos, and welcome back to our weekly book reviews! Now that we have all had some time to rest during the holidays, we are ready to delve into the spring semester with an especially powerful January theme: civil rights. Throughout the month we will focus on books about child activists and the ways in which young children can make a difference in the world. These books are inspiring to say the least, and will motivate any reader of any age to stand up for a cause that they believe in. Additionally, these books empower children and adolescents, reinforcing many of our values and objectives here at Vamos a Leer.

This week I will be reviewing Mama’s Nightingale: A Story of Immigration and Separation, written by Edwidge Danticat and illustrated by Leslie Staub. This book, best for ages 5-8, tells the story of a Haitian, immigrant family in the U.S. and a young girl who, amidst pain and separation, finds solace in her mother’s tales. As the protagonist overcomes some difficult challenges, she also learns to recognize the power of her own words.

The story centers on Saya, who is struggling with the separation from her mother, who has just been sent to “Sunshine Correctional” for not having “the right papers”. The name of the prison where Saya’s mom is being held reflects the practice of sugar-coating the real traumas that immigration laws and the separation of families inflict. In Danticat’s Author’s Note at the back of the book, she explains how this story is largely inspired by her own experiences as a child in Haiti dealing with the trauma of separation from her parents who moved to the U.S. Her parents tried to send for her and her brother, but could never succeed for they lacked “the right papers”. Danticat explains that she was always fascinated by “the idea of having the right papers” and how this abstract platitude weighed on many of her childhood memories: “As children in Haiti, my brother and I sometimes played writing games, making up passports, visas, and other documents that might one day reunite us with our parents.” Additionally, Danticat writes, “According to the Unites States’ Enforcement (ICE), the people Saya refers to as the immigration police, over 70,000 parents of American-born children have been jailed and deported in recent years. This book is dedicated to those children, who, like Saya, are dreaming of the day when their mother, or father, or both parents, will come home.” Danticat recreates her own childhood memories while infusing the story with elements of action, hope and change.

The story begins with Saya listening to her mother’s voice on the answering machine late at night. Mama is not at home and Saya listens to the answering machine when she misses her mother. The voice says in Haitian Creole, “Please, leave us good news!”: “Tampri kite bon ti nouvèl pou nou!” Mama’s voice foreshadows the hopeful charge of the story and the goal of “good news” that drives the protagonist’s actions.

Saya and Papa go to visit Mama in prison and Saya is overwhelmed by sadness upon seeing her mother. In the short time they have together, Mama tells Saya traditional Haitian stories about the wosiyòl, “a beautiful nightingale who loves the taste of a sweet cottony fruit called a soursop”: “Mama leans over and hums the wosiyòl’s song in my ear. The melody is as soft as Mama’s touch and as sweet as a real soursop”. Wosiyòl is also Mama’s nickname for Saya, as she too loves the taste of the soursop fruit.

This reference to the tales of the wosiyòl, coupled with Staub’s evocative illustrations, presents the songbird as a symbol of freedom. Throughout the book there are also illustrations of birds perched on the interior windowsill of Mama’s jail cell, and caged songbirds in the decorative margins of the text, which represent, as readers may surmise, a lack of freedom. During Saya’s visit with Mama, Mama gives her a package with cassette tapes of her “wind-chime voice singing about the soursop and the nightingale” so that Saya can listen to her mother’s voice before bed. When Saya puts the cassette tape in she listens to Mama’s songs and an additional tale that Mama made up herself. In an illustration to match, Staub paints Mama as a beautiful spirit coming to visit Saya at night, with songbirds, hearts, stars and flowers swirling around her in a dream-like flurry. However, Mama is also shown with a rope strung across her arm, and two caged birds tied to either end. This symbolizes the shackles that have been placed on Mama in real life, despite the temporary reprieve of Saya’s dream.

The imagery of the caged songbird has been a recurrent symbol in African American literature, most notably in African American poet Paul Laurence Dunbar’s poem, “Sympathy”: “I know why the caged bird sings, ah me, / When his wing is bruised and his bosom sore,—/ When he beats his bars and he would be free; / It is not a carol of joy or glee, / But a prayer that he sends from his heart’s deep core, / But a plea, that upward to Heaven he flings—/ I know why the caged bird sings!” Maya Angelou also borrows the refrain from Dunbar’s poem and uses it as the title of her autobiographical novel, I Know Why the Caged Bird Sings, where she narrates her experiences 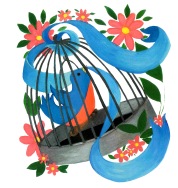 growing up as an African American girl. Angelou also has a poem titled “Caged bird”, where she expresses themes of freedom and injustice: “The caged bird sings / with a fearful trill / of things unknown / but longed for still / and his tune is heard / on the distant hill / for the caged bird / sings of freedom.” Although Angelou’s poem, like Dunbar’s, focuses on “why the caged bird sings”, Angelou also incorporates a complementary action of listening, where the “tune is heard/ on the distant hill”. The motif of the caged bird is about call and response, speaking and listening. In the case of African Americans speaking out against racist oppression, or Haitian immigrants speaking out against unfair detention policies, the idea of the caged bird becomes a reminder of the importance of listening and being spurred to action by someone else’s expression of injustice. This is an important lesson for young readers who can take note of Saya’s own manner of listening to her Mama’s song and then taking action in response. As Dunbar and Angelou both express in their poems, the caged bird’s song is not an expression of joy, but a wishful prayer or a call to action. The caged bird, like Mama, does not sing because it is happy, but because it is in want of freedom.

These allusions to African American literature through both Danticat’s text and Staub’s illustrations broach an important discussion on themes of immigration: the diversity of the immigrant experience in the U.S. As we frequently showcase books that deal with immigration, separation and alienation (such as our latest post on Sonia Nazario and the plight of child immigrants from Central America), we here at Vamos a Leer think that it is important to emphasize how the immigrant experience differs amongst nationalities, and, more precisely, amongst individuals. Although many of these narratives can be tied together by commonalities, the wide range of immigrants that come to the U.S. every year still have unique experiences and face different challenges. They may have to enter the country through different means (by land or by sea), face different language barriers (Spanish or Haitian Creole), or encounter different legal systems (predicated on the country from which they come).

In particular, current events have shown that the Haitian immigrant faces challenges not only in the U.S., but also in other countries, such as the Dominican Republic, where Dominicans of Haitian descent have been denied birth-right citizenship and are being forced back to Haiti.

In addition, the symbol of the caged songbird also reminds readers of the power and impact of art and expression. Many of our projects here at Vamos a Leer include ways in which art can make a difference, from lesson plans on Chilean arpilleras, to lesson plans on art and politics in the City of Juárez. Art and literature, as evidenced in Angelou’s poem, are not only important forms of self-expression, but also of education, whereby viewers and listeners can gain valuable insight into another’s experiences. Artistic expression can educate and inspire change.

As Danticat’s story progresses, readers will witness the power of artistic expression and the ability of young people to positively affect their world. As Saya decides to take matters into her own hands and stand up for what she believes in, she discovers the power of her words, while ultimately learning why the caged bird sings.

Given that Danticat is such a powerful writer and presenter, here are a few resources where she can speak directly to the ideas embedded in this story:

For those of you interested in using this book in the classroom, here are some additional resources:

For those of you interested in learning more about the use of the “caged bird” in African-American literature, here are some additional links:

9 thoughts on “¡Mira Look!: Mama’s Nightingale: A Story of Immigration and Separation”