The summer months may seem quiet at times, but really there’s a veritable buzz of activity.  In the world of children’s literature, authors, illustrators, publishers, reviewers, librarians, and even teachers (whose summer breaks are rarely ever actual breaks) are hard at work pushing for diversity, representation and accuracy. Anansesem is in this vanguard.

A brief aside for those unfamiliar with the organization. In their own words,

Anansesem is an online magazine devoted to Caribbean children’s and young adult literature written by both new and established writers. It was founded in 2010 to encourage the writing and illustration of Caribbean literature for and by young people. Major issues are published twice a year in .pdf format while guest posts and online-only features are published throughout the year.

The ezine invites submissions of Caribbean short stories, poetry and illustrations for children regardless of the geographical location of either the author or characters. We also publish book reviews, interviews and non-fiction. Submissions by Caribbean citizens get first priority.

We’re huge fans of Anansesem here at Vamos a Leer, and frequently turn to them to help contextualize and better understand the Caribbean literature that crosses our desks. Their latest announcement has us even more over the moon than usual. They’ve introduced starred reviews! This means that they’re putting the power of meaningful and informed reviews back in the hands of the Caribbean community. Read more about why they’re doing this, what they aim to achieve, and how they’ll go about it, in the announcement from Summer Edward, Anansesem editor-in-chief: Introducing the Anansesem Starred Review (And Giving Caribbean Books For Young People The Reviews They Deserve).

Their May issue (forthcoming) introduces starred reviews for Marti’s Song for Freedom / Martí y sus versos por la libertad by Emma Otheguy and Beatriz Vidal, The Field by Baptiste Paul and illustrated by Jacqueline Alcántara, All the Way to Havana by Margarita Engle and illustrated by Mike Curato, and Hurricane Child by Kheryn Callender. The issue also includes, among other items, spotlights on illustrators Lulu Delacre and Rosa Colán Guerra. Check their website for the full PDF (nominal cost associated) or a free sample of the publication.

¡Buenos días! As everyone prepares for the holiday season, we thought we’d wrap up our posts for this year by sharing some winter and holiday literature resources.

Two years ago we put together a Reading Roundup of 10 Children’s Books About Latino Winter Celebrations, which you might reference if you’re looking for engaging books for your young ones in the coming weeks. Some of these books have been reviewed in more depth by Alice and Katrina: The Miracle of the First Poinsetta, José Feliciano’s Feliz Navidad, A Piñata in a Pine Tree, ‘Twas Nochebuena, and La Noche Buena: A Christmas Story.

In addition, if you visit our Las Posadas/Winter Celebrations tab, you can find more posts related to Latin American/Latinx holiday celebrations. Also, Colleen wrote a Reading Roundup about Latino/a Children’s & YA Books Honoring Immigrant Experiences in the Winter Season, which I recommend checking out. Although not all of them are holiday related, most are. Finally, Katrina has written several En la Clase posts about the holiday season, including one about literature for teaching about Las Posadas, and another that highlights 3 books for teaching about the holiday season.

We hope you are able to use these resources in the classroom as the winter holidays approach!

Our wonderful children’s book reviewer, Alice, is away from the blog this week. In  place of her review, we thought we’d share this beautiful resource developed by Bookology Magazine: Poetry Mosaic.

In honor of #NationalPoetryMonth, Bookology has invited authors to read their original poetry and is compiling the recordings into a mosaic of poets and poetry, with a new author highlighted each day. All of the poets selected are amazing, but here are a few of our Vamos a Leer favorites: Jorge Argueta, Pat Mora, and Margarita Engle. Argueta and Engle read both English and Spanish versions of their poems, so this is an even better start to the day for our bilingual readers. Take your pick of language!

Hope you enjoy this poetic start to the day as much as we did!

Did you know that authors R.J. Palacio and Meg Medina both grew up in Spanish-speaking, lived in Flushing, Queens, attended the same elementary-school – and were best friends?

In a recent interview with the Washington Post, renowned authors R.J. Palacios (author of Wonder) and Meg Medina (author of Yaqui Delgado Wants to Kick Your Ass) discuss their divergent, but parallel paths to becoming children’s authors. Alin mentioned this post in her recent Week in Review Post, but I wanted to take the time to share a couple of my favorite excerpts from Medina. I highly encourage you to read the interview in its entirety. It’s definitely worth the read!

END_OF_DOCUMENT_TOKEN_TO_BE_REPLACED

“To prepare children and young people to participate in the construction of a more just and joyful future, we must tell them stories that make the invisible visible and unsettle what is taken for granted.”

I love everything about this article! In case you missed it, I wanted to share it on Vamos a Leer. It’s so relevant to many of the conversations we’ve been having here on the blog and with our local NM teachers.  I hope you’ll read the whole thing on the Latinxs in Kid Lit website!

To prepare children and young people to participate in the construction of a more just and joyful future, we must tell them stories that make the invisible visible and unsettle what i…

Source: Educating Children and Young People for Joy and Justice: A Guest Post by Author and Teacher Ann Berlak

Lee & Low Books published a great article on their blog this morning.  In the article Tu Books Publisher Stacy Whitman discusses why avoiding discussions of race with young people can do more harm than good.  We couldn’t agree more.  If you find yourself in conversations where others still believe the colorblind approach is the best way to go, Whitman offers some great research and resources to explain why this is not be the case.  I’ve included an excerpt below, but I hope you’ll check out the article in its entirety here.

“Research has shown that the “colorblind” approach—teaching children that it is racist to acknowledge racial and ethnic differences—is doing no one any favors, and in fact can reinforce racist attitudes and assumptions, and especially reify systemic racism. “Black children know irrefutably that they’re black by the time they’re about 6 years old and probably earlier,” one article noted in our research. Do white children know they’re white? If not, how do they think of themselves?

At Lee & Low, we’ve always believed that even the youngest readers have the capacity to understand and appreciate difference—that’s why many of our children’s books address issues like racism and discrimination. But you don’t have to take our word for it: many experts, educators, and academics have done work on this topic as well and their recommendations can help point parents and teachers in the right direction.”

Just in case you haven’t read this yet, I wanted to share on the blog today. There are some great tips and ideas here. “Where I’m From” poetry is one of my favorite things to do at the beginning of the year. If you’re working with any first year teachers “12 Tips for New Teachers” is the perfect thing to share with them.

Start your school year off by inviting students’ lives into the classroom through poetry. Download this free lesson from our newest book, Rhythm and Resistance.

Get inspired to incorporate environmental justice lessons into your curriculum regardless of your subject area! Here is the “The Mystery of the Three Scary Numbers” lesson (with handouts) from A People’s Curriculum for the Earth.

Order your Planning To Change the World plan book*!

Download and print Larry Miller’s “12 Tips for New Teachers.” From our New Teacher Book, use reminders for yourself and to give to new teachers in your building. 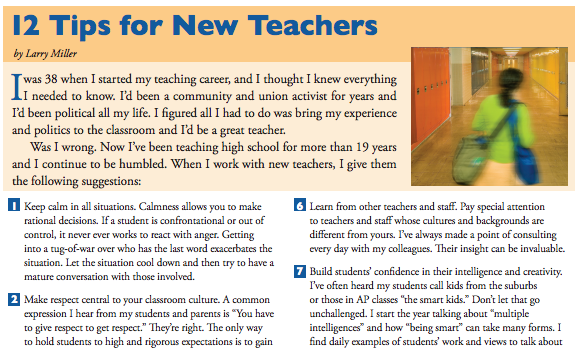