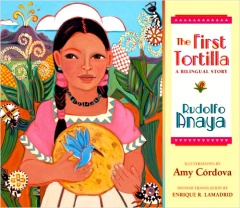 ¡Saludos, todos! This week I will be reviewing The First Tortilla, written by Rudolfo Anaya, illustrated by Amy Córdova, and translated into Spanish by Enrique R. Lamadrid (one of our professors here at UNM!). This book review will conclude our November-themed books, as next week we turn our attention to our December discussions on winter celebrations. For now, though, we are focusing on this lovely, bilingual retelling of a Mexican legend, keeping in tune with our themes of food and family, as well as indigenous traditions. This story, with stunning illustrations and an endearing female protagonist, depicts the harvest season amongst a small, Aztec tribe. Readers will revel in the old legend, while learning of the need to respect nature and its resources. For those of you avid blog-readers, this review will surely remind you of some of our previous reviews on other works by Rudolfo Anaya, and his retellings of old myths and legends.

Best suited for ages 9-13, Anaya’s work tells the fictional tale of how a young girl’s courage saves her village from a terrible drought, and introduces corn to the peoples of Mesoamerica. Ultimately, the discovery of corn also leads to the creation of “the first tortilla“. The old legend, as well as Anaya’s rendition, reminds readers and listeners of the importance in giving thanks, and appreciating the land and the sustenance that it provides.  END_OF_DOCUMENT_TOKEN_TO_BE_REPLACED

¡Saludos, todos! This month’s book reviews will explore the significance of death by looking at stories about Día de los Muertos and La Llorona. In the process, we’ll open a conversation about what death means in Mexico and emphasize why that discussion is relevant to our classrooms – namely, because students deserve a safe space in which to discuss loss and grieving. This topic is one way to offer them that opportunity.

We’ve tied together the celebration of Día de los Muertos and the myth of La Llorona because they both come from Mexican culture and address concepts of loss; however, we want to emphasize that they are not otherwise related. Although it would be easy to conflate the two topics given their similarities, we advise against this. Día de los Muertos and La Llorona are better viewed as two separate topics tied together by commonalities. October is an opportune time to broach the topic of death and loss given that Día de los Muertos is not far off (November 1 and 2). 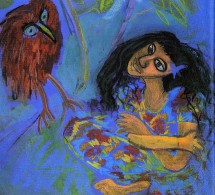 We start the month by featuring the children’s book Maya’s Children: The Story of La Llorona, written by New Mexican author Rudolfo Anaya and illustrated by Maria Baca. Anaya’s adaptation portrays La Llorona as a sympathetic figure whose haunting spirit reflects the enduring memories of love and loss. END_OF_DOCUMENT_TOKEN_TO_BE_REPLACED

As it is the season of Las Posadas and La Pastorela, there are some wonderful opportunities to attend local events!

The Vortex Theatre and the National Hispanic Cultural Center present The Farolitos of Christmas, a timeless, heartwarming play by iconic New Mexican author Rudolfo Anaya. The play is based on Anaya’s beautifully illustrated book of the same title.

It’s Christmas in San Juan, New Mexico, and young Luz worries that with her grandfather sick and her father away in a hospital recovering from his war wounds, they cannot celebrate Christmas with the lighting of the traditional luminarias, or bonfires, outside their home.  Then Luz has an idea for making little lanterns, or farolitos, to welcome the holiday celebrants, as well as her father, who returns home unexpectedly in time for Christmas.
(Taken from http://www.nhccnm.org)

Performances will take place December 14-16.  For more information about the play or  how to purchase tickets click here.

Don’t forget–Ailesha posted yesterday about Friday evening’s upcoming presentation of La Gran Pastorela de Belén, so if you missed that post check it out!

The UNM English Department’s blog takes note that Rudulfo Anaya’s famous novel, Bless Me, Última, turns forty this year.  They write, too, ” if that’s not enough reason to celebrate, the film version of the novel is scheduled for release in 2012 as well.  Just last month Rudolfo Anaya received a Lifetime Achievement Award from the L.A. Times and among other things, the Times cited his debut novel, Bless Me, Ultima, as “the most widely read and critically acclaimed novel in the Chicano literary canon.”  They will be celebrating Anaya’s work and this  remarkable novel by staging a Reading Marathon on Monday, April 23, 2012.  If you’re in the Albuquerque area, I encourage you to be a part.  Rudolfo Anaya himself will read the final page when the event concludes at 5:00p.m.

I assume there’s little to tell you about Bless Me, Última.  Most of you have probably read it.  But on the off-chance that you haven’t already picked up this novel by Anaya, allow me to urge you now.  In my words: the novel is enchanting, mesmerizing, and inspiring with writing that is at once powerfully blunt and lyrical.  In the words of whoever it is who writes for the National Endowment for the Arts (NEA) The Big Read program, the novel is “A great book [that] combines enlightenment with enchantment.  It awakens our imagination and enlarges our humanity.  It can even offer harrowing insights that somehow console and comfort us.”  On a more concrete level, it’s a novel about a young boy’s coming-of-age, his internal conflicts over faith and tradition, authority and independence, family and community.

If you haven’t read the novel yet, I encourage you to check it out from your local library and then go back to the NEA’s website, where you’ll find a Readers Guide, Teacher’s Guide, Audio Guide, Films, and information in Spanish. Everything you need (and then some) is there to help you delve deeply into the book.  Or you can do what I did – decide it’s finally time to sit down, grab the book from the shelf, and immerse yourself in silence for a few hours.  Either way, I imagine you won’t regret it.