Today’s book fits in perfectly with our theme of love for community. Ada’s Violin, written by Susan Hood and illustrated by Sally Wern Comport, tells the true story of the Recycled Orchestra of Paraguay. The story is told through the eyes of Ada Ríos, a young girl living in the town of Cateura, Paraguay. In 2017, this book won the Américas Award for its engaging representation of Latin America and its usefulness for K-12 classrooms.

Cateura is the home of the largest landfill in Paraguay; it is the place where the trash of the country’s capital, Asunción, is 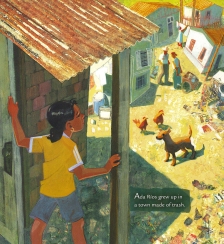 dumped. Most of the inhabitants of Cateura make a living bygathering recyclables and treasures from the landfill. The story tells about how Ada’s abuela registers Ada and her younger sister for music classes with señor Favio Chávez. Favio came to Cateura as an environmental engineer to teach safety measures to those working in the landfill. During his time in Cateura, he took an interest in the children of the workers and began a music class. When the class did not have enough instruments for everyone who signed up, Favio creatively decided to enlist a local carpenter, Nicolas Gómez, for help. Together, they made instruments from objects they found in the landfill. Thus, the Recycled Orchestra of Paraguay was born.

This book demonstrates how a community is able to make the best of a difficult situation, and even thrive. It teaches the importance of dreaming big and believing in oneself. Furthermore, it shows the importance of support and coming together. Lastly, throughout it all, it contradicts stereotypes of impoverished communities as lacking agency.

The author’s note tells of the amazing successes that the Recycled Orchestra has had, in addition to the way that its community has remained at the center of that success. The money that the orchestra makes has gone back into the community to better the lives of the musicians’ families. And this grassroots-driven success continues to grow, with the orchestra starting out as a class of 10 and now consisting of some 200 students. 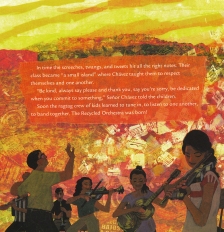 Wern Comport’s illustrations accompany the descriptions of daily life in Cateura beautifully. The colors and texture reflect the complex, textured, day-to-day of the characters. Furthermore, Wern Comport’s use of torn pieces of paper simulates the recycled nature of the orchestra itself.

This book could be accompanied by a number of different lessons in the classroom. It depicts the concept of recycling in a unique way, showing kids that what we throw in the trash has to go somewhere and that it always affects somebody. Our choices and actions matter! For slightly older students, that conversation can segue into deeper discussions about environmental racism – leading to larger-scale implications of how societies and countries choose where to leave their refuse, why, and what happens to it after it’s “abandoned.” On this topic, educators might appreciate watching Vic Munoz’s documentary, Wasteland, which documents a community’s efforts in Rio de Janeiro to recapture the garbage there, much as the people do in Cateura.

The book can also be accompanied by the documentary about The Recycled Orchestra, titled Landfill Harmonic.

At the end of the book, Hood lists a few websites, including that of The Recycled Orchestra Exhibit at the Musical Instrument Museum, in addition to the website of the actual Orchestra: Orquesta de Reciclados de Cateura.

The book also lists three videos to check out:

It’s not often that I get the chance to contribute TWICE to the blog in one week, but I couldn’t resist the opportunity to chime in on the conversation about diversifying Women’s History Month. I’ve been humming to myself over here in the office as I’ve been digging into children’s and young adult literature focused on women’s history – and Hispanic women’s contributions to history, in particular. While there are beautiful books by and about women peppered throughout the blog and in our previous Reading RoundUp posts, for this month I had the pleasure of finding and compiling books based on real life heroines. These are books that highlight the groundbreaking, earth-shattering contributions and hard work of Hispanic/Latina/Chicana and indigenous women in the United States, Cuba, Ecuador, Puerto Rico, Mexico, Guatemala, Paraguay, and Chile. Sometimes their work was an act of personal triumph; at other times, it revolutionized society.  Their achievements break barriers in music, labor rights, school segregation, literature, and art.  Across the spectrum, their stories are absolutely worthwhile.

As a caveat, I should add that I haven’t personally read all of the books on this list — like The Distance Between Us by Reyna Grande, When I Was Puerto Rican by Esmeralda Santiago, and Ada’s Violin by Susan Hood — but they’re stellar publications if others’ reviews are anything to go by.  If you should add them to your bookshelf, please let us know what you think. They’re certainly on our TBR list now.

Side note: The descriptions provided below are all reprinted from the publishers’ information.

Without further ado, here are 15 children’s and YA books that we hope will expand your classroom and home discussions about Women’s History Month!

p.s. Remember that Teaching for Change is offering a discount in their TFC non-profit, indie bookstore in honor of Women’s History Month. Just use the code Women2017 at checkout!

END_OF_DOCUMENT_TOKEN_TO_BE_REPLACED

This month we’re joining many around the country in celebrating Women’s History Month. Of course, we hope that the discussion of womyn (past, present, and future) can be constant and valued within the standard curriculum that’s used all year long, but we don’t deny that Women’s History Month provides a timely opportunity to hone in and heighten that effort. More than just acknowledging women, though, we want to draw attention to the diversity of women whose struggles and experiences have led us to the present day. Unfortunately, information that goes beyond the White (largely middle class and US-focused) experience is scarce. It’s rather hard to identify, let alone come by, resources that  shine a light on the breadth and depth of women’s experiences.

While they get some props for trying, even the Smithsonian Education division only goes so far toward remedying the lack of materials. On their Women’s History Teaching Resources site, for instance, they offer materials that focus on African American Women Artists and Native American Women Artists, but make no mention of Hispanic/Latina/Chicana women!  In all honesty, though, the portal was just recently launched and we can only hope that the content is still a work in progress.

On a more positive note, organizations such as Teaching for Change are making significant strides toward diversifying the conversation. Starting March 1st, they’re daily highlighting diverse books featuring women’s accomplishments every day AND offering a 20% discount on book purchases from their non-profit, indie bookstore (code Women2017). Check out their page on “Women’s History Month: A Book Every Day” for the details.

For our part, we’re going to bring you suggestions for worthwhile children’s and YA literature over the next few weeks, all with the goal of highlighting women’s accomplishments. Stay tuned for our blogging team’s thoughts and contributions! If you’re hard at work diversifying the conversation in your classroom, please share your experiences with us — we’d love to hear what you’re doing to change the world!