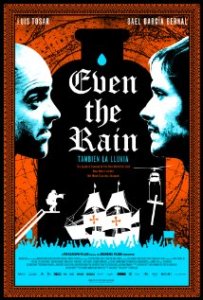 As Alice mentioned in Monday’s post, one of our themes this month is the retelling of familiar tales.  Today’s En la Clase connects this theme to the idea of rethinking Columbus, another relevant topic for this time of year, through the film También la lluvia/Even the Rain.  If you’re not familiar with the film, here’s a quick synopsis:

Idealistic filmmaker Sebastián (Gael García Bernal, The Motorcycle Diaries) and his cynical producer Costa (Luis Tosar, The Limits of Control) arrive in Bolivia to make a revisionist film about Christopher Columbus’ conquest of the Americas. But as filming commences, the local citizens begin to riot in protest against a multi-national corporation that is taking control of their water supply. With the film shoot in jeopardy, both men find their convictions shaken. Inspired by the real-life Water Wars in Bolivia in the year 2000, Even the Rain explores the lasting effects of Spanish imperialism, still resonating some 500 years later in the continued struggle of indigenous people against oppression and exploitation.

As a story within a story, the film offers a re-telling of Columbus’ conquest and colonization of the Americas through the production of a new film about Columbus.  As events unfold during the filming, the historical content of the film is presented in such a way as to draw strong comparisons between Columbus’ actions and those of the actors, producers, and directors.  Despite the underlying motivation to produce a more critical version of conquest and colonization, we find history repeating itself hundreds of years later through both the production of the film and the Bolivian Water Wars.  The film’s producers describe it in the following way: END_OF_DOCUMENT_TOKEN_TO_BE_REPLACED