Thanks again for joining me this week! Last week, I featured Ana Teresa Fernández’s work in my post describing how activism can be practiced in different forms; art being one of them. This week, I will expand on the idea of activism in different forms, focusing more specifically on children as activists. As Keira noted in her Sobre Enero post, January is about focusing not only on how to teach young people about injustices, but also offering ideas for how they can take a stand against them. So, this week, I will provide online resources to introduce some really important young activists who have made a big difference in their country, Colombia, since they spoke up.

There were more than 4,000 child deaths in Colombia in 1996 due to civil war and La Violencia, which had already been underway for more than 30 years. Graça Machel, a well known humanitarian sent to study the impact of civil war and violence on children, visited Colombia that same year. When 15-year-old Farlis Calle Guerero heard the call for children’s testimony at her school, she organized as many of her classmates and friends as she could to present testimony to Graça Machel on how the war had impacted them. Bringing these students together to create this presentation led Farlis to the realization that they (her classmates and the rest of the youth) could be the solution to the violence. After the presentation, Graça reported back to the U.N. while Farlis and about two-dozen of her classmates got to work organizing and participating in peace meetings, which led to the creation of “peace zones” and “peace carnivals.” The movement, which turned out to have the participation of more than three million Colombian children, became known as the Children’s Peace Movement. Farlis and her classmates were able to start a movement, with the help of UNICEF, that created an international voice for children’s rights in all countries. END_OF_DOCUMENT_TOKEN_TO_BE_REPLACED

Happy New Year! I hope everyone had a safe and enjoyable holiday break. Thank you for joining me again. This semester we are kicking off with a focus on activism. You may notice that many of our upcoming posts connect and highlight important activists in Latin America, the organizations they belong to, or the programs they founded. In honor of the focus on activism, I am highlighting some of Ana Teresa Fernández’s recent work on “erasing” the U.S.-Mexico border—using art! 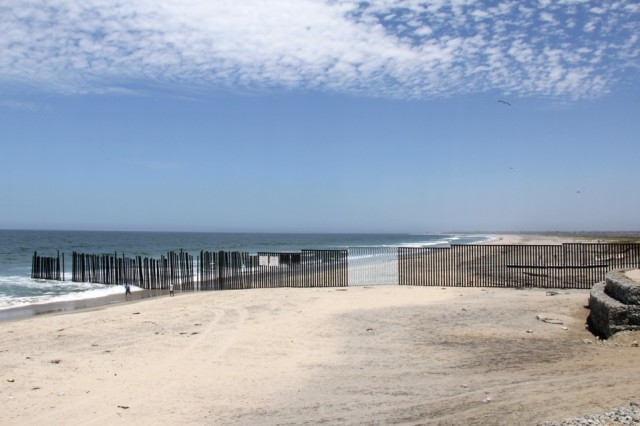 Ana Teresa Fernández is a Mexican-American artist. She and a group of thirty volunteers teamed up to paint the border fence in Nogales, Sonora a light blue color in order to blend it with the sky. In her video about the project, Fernández talked about the fence as a “symbol of hate and pain.” She thought to change that by making it invisible (at least a piece of it). Her work constitutes activism “because it re-contextualizes a possibility. It makes you not see the border — just for a split second — and [makes you see] how two countries can exist, or coexist, peacefully,” said Fernández in an interview with Raquel Reichard from Latina. To her, the problem of the border fence is that it divides two groups of people who could otherwise live in harmony. The idea, while earning support from many people, sparked hate in some who have taken to writing hate mail and nasty correspondence to the artist. END_OF_DOCUMENT_TOKEN_TO_BE_REPLACED 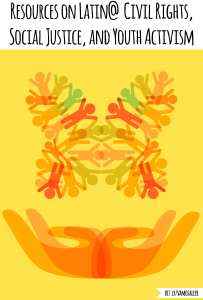 We’re glad to be back after a rejuvenating winter break and excited to engage in new conversations with you! We begin the year by focusing on issues of civil rights and social justice that are meaningful to people everywhere, but particularly relevant to Latin@ and Latin American communities. This month we focus not only on how to teach young people about injustices, but more importantly offer ideas for how they can take a stand against it. In the next few weeks we’ll discuss how children and youth can push back against prejudice and discrimination in their lives and in broader society.

Our dedicated bloggers will tackle the question in a few ways: