¡Buenos días! Today’s book fits perfectly with both National Poetry Month and Earth Day. Martí’s Song for Freedom / Martí y sus versos por la libertad, written by Emma Otheguy, illustrated by Beatriz Vidal and translated by Adriana Domínguez, is a picture book biography  of the Cuban hero José Martí (1853-1985). It was published in 2017 by Lee & Low Press. Each page provides the text in English and Spanish, with Otheguy interspersing Martí’s own words alongside her narration of his life.

This book would be a wonderful contribution to children’s literature at any point, but it stands out in the present era as a timely resource for encouraging young readers to see injustice and seek change in the world around them. 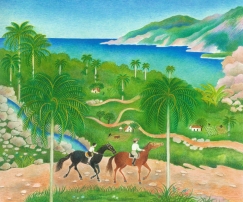 For a snapshot into why his life might inspire readers today, long after his death, the publisher’s description offers a useful biographical sketch:

As a young boy, Jose Martí traveled to the countryside of Cuba and fell in love with the natural beauty of the land. During this trip he also witnessed the cruelties of slavery on sugar plantations. From that moment, Martí began to fight for the abolishment of slavery and for Cuban independence from Spain through his writing. By age seventeen, he was declared an enemy of Spain and was forced to leave his

beloved island. Martí traveled the world and eventually settled in New York City. But the longer he stayed away from his homeland, the sicker and weaker he became. On doctor’s orders he traveled to the Catskill Mountains, where nature inspired him once again to fight for freedom. Here is a beautiful tribute to Jose Martí, written in verse with excerpts from his seminal work, Versos sencillos. He will always be remembered as a courageous fighter for freedom and peace among all men and women.

Martí was a philosopher, poet, traveler, and, yes, “fighter for freedom and peace among all men and women.” His life is complicated and not easily conveyed to even adult readers, yet Otheguy, who is a scholar of Spain and colonial Latin America, has managed to do just that. In School Library Journal’s starred review, they acknowledged that she offers a “sensitive and poignant tribute to one of Latin America’s most important historical figure.”

philosophy. An epilogue at the end provides even more information about his life. This attention to detail is itself enough for the book to merit a prime bookshelf spot, but Otheguy does more than just situate him in history. Her carefully chosen verses also allow students to see the person behind the figure, and particularly his love of the natural

world. With Earth Day upon us, it’s timely to read how she explores how the natural world influenced his philosophy.

This attention to the natural world is particularly evident inOtheguy’s descriptions of Martí’s time in the United States. During Martí’s exile to New York, he soon came to realize that the American’s fixation withmoney created a sense of indifference and apathy which he could not tolerate. In order to escape the city and its materiality, Martí would go tothe Catskill Mountains, where he would walk and write.

Otheguy describes the Catskill Mountains as Martí’s way of dwelling in Cuba fromafar – the pine trees of rural New York forests paralleling Cuba’s palm trees and beaches. A love of homeland becomes a literal love for the land, leading to the notion that it was his time in the New York countryside which recharged Martí and prompted him to return to Cuba to fight for his people.

Stanzas taken directly from Martís work, Versos sencillos, ring boldly from each page and reinforce the nuanced importance of the landscape. Here, for instance, with few words he somehow manages to speak at once to the natural beauty of the New York and Cuban landscapes and his estranged longing for home:

My song is of the palest green

And the fieriest crimson:

My song is a wounded deer

That in the countryside, seeks safety.”

Vidal’s soft and colorful illustrations perfectly accompany the words of both Otheguy and Martí. Her depictions of the New York and Cuban countryside, of battlefields and urban spaces and of pain andcelebration are breathtaking and dynamic. As much as each individual image is striking, it is her choice of juxtaposition that lingers. Images of rolling hills are matched by horses charging into battle.

At the end of the book, the Acknowledgments section allows Otheguy to tell readers how she places herself in relation to Martí and of her family’s experience as Cuban Americans in New York. She writes:

“This book was inspired by my parents, who read me stories from La edad de oro and who embody every day the capacity to hold two homelands, two cultures, and two languages within oneself. When I was a child, they talked endlessly about their lives in Cuba, while staying ever-present in the very different lives my brother and sister and I  shared. I hope this book captures my love for the palm trees of my parents’ homeland and the oak trees of nuestro Nueva York; I hope this book also conveys what it means to me that Martí, too, knew, loved, and was inspired by these two places.” Young readers who come from families and households that share multiple languages, places, and people may well relate to both Martí’s and Otheguy’s lives.

Here are some resources for you to check out while working with this book in the classroom:

For those interested in the book itself, we suggest checking out:

I hope you enjoy this book as much as we do!