I hope everyone had a wonderful summer, it is hard to believe that the school year is already upon us! I just wanted to let you know that although I will no longer be posting World Wide Web articles here on Vamos a Leer, I am continuing to write about film and current events elsewhere in the community in case these topics might interest you.

For a blog on currents events and news from around Latin America, along with links to a absolutely in-depth and terrific news source, please check out the Latin American Database Blog! END_OF_DOCUMENT_TOKEN_TO_BE_REPLACED

Fellow blogger and children’s book reviewer Lorraine Archibald will be leaving us next year to pursue a FLAS Fellowship to learn Quechua.  As her team member throughout this past academic year, I have been thoroughly engaged and inspired by Lorraine’s and our entire team’s motivation to provide engaging material for our amazing readers.  I cannot express fully how much I have enjoyed and grown with all of you while writing my weekly World Wide Web posts.  With this beautiful note from Lorraine, I do not think it can be stated any better:

END_OF_DOCUMENT_TOKEN_TO_BE_REPLACED

Continuing along with our theme of the merger between women’s rights and poetry in Latin America, we have an amazing video resource to share today.  Unlike past examples, however, today’s post will focus on a present day, female, indigenous hip hop artist from southern Mexico and an amazing video that comes with English subtitles so the entire class can appreciate the poetic lyricism of her call for human rights, women’s rights, indigenous rights, and a greater social consciousness.  Her name is Mare Advertencia Lirika, and today we will be watching the video for her song entitled “And What Are Your Waiting For?” (Y Tu Que Esperas?).  In this song, Mare combines the metrics of rap lyrics with elements of social resistance that have been present in her community for quite some time.  At 1:45 of the video, Mare says:  “We have been denied our own history/ Our words have been taken by other mouths” (1:45).

END_OF_DOCUMENT_TOKEN_TO_BE_REPLACED

It is difficult to talk about Latin American poetry during the 20th century without mentioning this poet.  And no, I am not talking about Borges, nor Neruda nor Paz.  I’m talking about Rosario Castellanos.  Although her name is not quite as famous as the others, and although many scholars would put up a strong argument that it would, in fact, be quite easy to discuss Latin American poetry without mentioning her work, I would argue that her place within the construction of Mexican national identity post-WWII is as important as anyone else. END_OF_DOCUMENT_TOKEN_TO_BE_REPLACED

Mayan Hands is an organization that promotes the social, economic and historical importance of weaving among Mayan communities in the highlands of Guatemala.  Mostly, it is the women in these communities who take up the art of weaving at a very young age; in fact, weaving is synonymous with a birth-rite for many Mayan girls and is considered an essential part of community life.  Mayan weaving is known for a refined and unique style called back-strap weaving.  Having the students watch the Mayan Hands’ back-strap weaving videos is an amazing opportunity to use media on the web to bring a far-away cultural reality into the classroom.

After watching the videos, students should try and answer the following questions, as well as any others they might formulate or be inspired to ask.  How does weaving act as a tool for organization among women?  In what ways do the videos portray the Mayan art of weaving (ancient or modern; technical or basic)?  How does Mayan back-strap weaving relate to tourism and to ourselves as consumers here in the north?  As the students begin formulating ideas about Mayan women and the art of weaving, here is some important background information.

END_OF_DOCUMENT_TOKEN_TO_BE_REPLACED 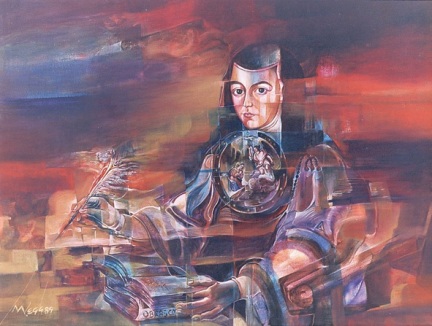 Two classroom lessons on ‘The First Great Latin American Poet’, Sor Juana Ines de la Cruz, are available on EDSITEment!  We saw Sor Juana at the center of Lorraine’s post earlier this week, and we were introduced to a young girl whose vivacious, voracious and eager appetite for knowledge and learning set her apart in the colonial period in which she was born. As a college student who often studies topics in Mexican history, I cannot emphasize enough how central a figure Sor Juana is, both historically and in the construction of Mexican National Identity.  Sor Juana’s life work speaks to the infinite complexity of the colonial period, a period we normally reduce to one of unabated suppression over minority and marginalized voices.  However, the more we study our colonial past, the more we realize that political and social agency (or power) did in fact exist within many marginalized communities and individuals.  As students living in the modern age, we may be surprised to see Sor Juana’s audaciousness and ability to carve out a place of academic autonomy for women in what is often thought of as the most restricting institution of all: the Church.  However, we can also think of Sor Juana as an artist, a genius, a mentor and a spirit dedicated to the betterment of her community, regardless of time period, religion or gender.  Needless to say, which ever way you decide to understand Sor Juana and her life’s work, it is difficult to ignore her remarkable and outstanding story.

END_OF_DOCUMENT_TOKEN_TO_BE_REPLACED

I am incredibly excited to share this week’s resource from the Wide World of the Web, because this resource not only contains the translated work of three phenomenal female modernist poets from South America, but it also helps tell the background story of how these three women came to be bound together in the June 1925 Issue of Poetry Magazine.  This historic issue, published in New York during a time when modernists such as Ezra Pound and T.S. Elliot were working out ways to form a new poetic tradition for the 20th century, this June 1925 issue featured an astonishing thirty-one South and Central American poets.  Among them were poets Alfonsina Storni, Juana de Ibarbourou, and Gabriela Mistral (featured in Lorraine’s Mira Look post earlier this week).  In this amazing resource you will find the poets featured in 1925 organized according to country.  You can find Storni’s poem “Running Water” under Argentina, Mistral’s “Ecstasy” under Chile, and Ibarbourou’s “Bond” under Uruguay.  All three of these pieces are excellent examples not only of 20th century modernist poetry, but of the perspective of Western educated Latin American women of that time.

In Ibarbourou’s “Bond”, the poet replaces common articles of feminine adornment to symbolize the suffering endured by societal pressures of beauty.  Ibarbourou (spelled Ibarbouron in the 1925 edition), who was a lifelong advocate and writer on women’s rights in Uruguay and abroad, replaced diadems with a crown of thorns and earnings with “two burning coals vermilion.” END_OF_DOCUMENT_TOKEN_TO_BE_REPLACED

Earlier this week, Lorraine featured Celia Cruz, Queen of Salsa on ¡Mira Look! This amazing story for children written by Veronica Chambers and illustrated by Julie Maren is based on the inspiring rise to fame of Celia Cruz, the Cuban-born Cuban-American music icon widely regarded as ‘The Queen of Salsa’.

As the story focuses on her childhood and early rise to fame, I thought it would be a great opportunity to feature the amazing celiacruz.com, where you can find some of Celia’s greatest music videos from recent times, before she passed away in 2003.  After all, one of the most incredible characteristics of Celia’s career was her longevity and uncanny ability to remain relevant no matter how much the salsa world was changing from the early days, when she and Tito Puente were carving away a place for salsa within popular culture in Cuba, the U.S. and beyond.

Before focusing on the videos, here are some important biographical facts to help put into context where she came from and how she became named by Smithsonian as the Most Iconic America in 2012: END_OF_DOCUMENT_TOKEN_TO_BE_REPLACED

We begin the month of March (which will have a thematic focus on Latin American women) by looking at a film clip from the 1947 motion picture Captain from Castile.  This film clip is centered on a pivotal moment both in the film’s narrative, as well as Mexican national narratives, in which the conquistador Hernan Cortes and his soldiers go to meet Cacamatzin, an Aztec chieftain and king of the city-state of Texcoco.  What is important for us is the presence of Doña Marina, also known in legend and history as ‘La Malinche’.  As Lorraine aptly pointed out earlier this week in her discussion of Sáenz’ book A Perfect Season for Dreaming, the telling of oral histories, regardless of whether they are based on ‘reality’ or ‘imagined reality’, are nonetheless important and central to the construction of family and community identities.  With this in mind, we will look at this video clip and discuss the historical information that accompanies it on the Critical Commons feature of Captain from Castile, with a specific, critical focus on how Doña Marina is represented.

There have been so many differing accounts of how Doña Marina came to be known as “La Malinche” that her actual biography can sometimes seem nothing more than fodder for myth.  Many sources agree that she was born at the end of the 1400s into a family of local nobility near the present-day states of Veracruz and Tabasco, which was at that time a sort of borderland between the imperial Aztec empire and the Mayans.  Because of her geographic position and relative nobility, she was fluent in Nahual and Mayan as well as being situated near the Gulf coastal region where Cortes’ ships arrived. Named Malinali at birth, which was the Aztec Goddess of Grass and the ‘daysign’ on the Nahual calendar for her birthday, the names Malinche and Doña Marina probably did not come into use until after the arrival of Europeans and her becoming a translator and close advisor to Cortes.

END_OF_DOCUMENT_TOKEN_TO_BE_REPLACED 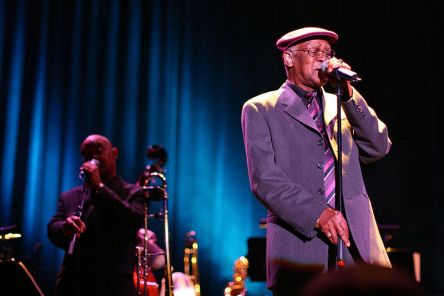 Take an audio-visual tour of music of the African diaspora in the Latin Caribbean on BBC’s Afrocubism.  This site offers sixteen incredible tracks from the album of the same title, Afrocubism, a project-album that involves a collaboration between Cuban and Malian musicians, representing the centuries-old connection between Western African and Latin Caribbean culture.  Once the Atlantic slave trade began, cultural traditions, languages, social structures and cosmological conceptions from the regions of western Africa were supplanted onto the islands of the Caribbean Sea, which up to that point had been inhabited by a plethora of Amerindian peoples, including the Taino and the Carib.

African traditions and languages, however, did not arrive alone; the entrance of European culture was equal in magnitude to that of West Africans, however the European influence took on a distinct aspect being that the colonial powers were systematically and institutionally advancing their languages, religions and cultural traditions, while those of the Africans were left alone, at best, and actively squashed by colonial authorizes at worst.  Out of this violent confluence of cultures and historical narratives, however, emerged new forms of identity, new forms of art and music that reflected this distinctive mix for the generations of Afrolatino Caribbean communities that followed.  On the island of Cuba, this has been exceptionally evident, as Havana and the Cuban hinterlands have been the source of so many world-famous movements in music and dance throughout the 20th century.  For a more regionally nuanced view, see this absolutely incredible resource on NPR’s Africa Boogaloo. END_OF_DOCUMENT_TOKEN_TO_BE_REPLACED