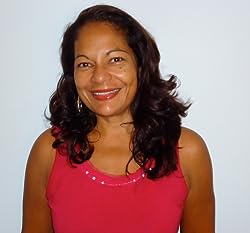 Saludos todos! This week we are taking the time to feature author Lynn Joseph, writer of this month’s featured book, Dancing in the Rain, and the topic of our March book group meeting. Like with our previous authors, we take this time to feature the breadth of the author’s collective oeuvre, as well as the more personal aspects of her life.

Lynn Joseph is originally from the island of Trinidad in the Caribbean. At the age of ten, she moved to Baltimore but continued to return to Trinidad for her summers. According to an interview with Joseph on her personal website, she started writing because of the nostalgia that was born from her bicultural childhood: “So, I lived two separate lives: an American school life and a Trinidad summer life. I began writing because I missed Trinidad so much; riding my bike everywhere, building forts in the hills, and just limin’ (hanging out) with friends. I also missed the steel pan music, and the joy I felt in Trinidad. The energy on my island is incredible.” Like this month’s featured book, Dancing in the Rain, most of Joseph’s books include elements of Caribbean culture. Dancing in the Rain won a Burt Award for Caribbean Literature (2015) prize, and skillfully focuses on the intersection between the culture, society and current events of New York City and the Caribbean. While exposing readers to certain Caribbean traditions and ways of life, this book also emphasizes the strong influence of Caribbean culture here in the U.S., particularly in New York.

Although Dancing in the Rain is set in the Dominican Republic, Joseph, in the same interview mentioned above, describes how nearly all of her books include elements of Trinidadian culture and heritage: “My early books feature Trinidad’s majestic Carnivals (Jump Up Time), its delicious foods like roti, doubles, and pholourie (Jasmine’s Parlour Day) and my favorite beach, Mayaro Bay (A Wave in Her Pocket). I also retell folktales based on the scary stories I heard from my aunts in Trinidad. Those stories are in A Wave in Her Pocket and The Mermaid’s Twin Sister. My mother used to tell me I would turn into a mermaid if I went swimming on Good Friday, and I believed her, so I wrote about it in the Mermaid book.”

Joseph got her B.A. in English from University of Colorado, Boulder before moving to New York where she started working with various publishing companies, further piquing her interest in children’s and young adult literature. Joseph, a woman of many talents, also obtained her law degree from Fordham University Law School in the mid-1990s, where she studied constitutional law and civil rights. Joseph works as a lawyer and writes her books on the side, while also taking care of her two sons, Jared and Brandt, which are also the names of the two boys in her novel, Dancing in the Rain. According to Joseph, “Reading cases is just like reading stories of people’s lives.” As an aspiring lawyer and writer myself, I find Joseph’s story especially inspiring!

For other readers, writers, and activists who feel moved by Joseph’s work and success, she offers some tips on how to take meaningful life moments and turn them into art and ambition: “Read a lot. Go inward. Don’t be afraid to be alone with your thoughts. In Trinidad, I walked alone at the beach and years later, I wrote scenes in The Color of My Words based on my memories. Try to absorb everything–the beautiful, sad, painful and joyous moments—these experiences will be there to draw on later when you need to create a heartfelt scene. And when you’re crying over some guy or girl breaking your heart, stop and think, “I need to remember this moment.” And you’ll be just fine.”

For those of you interested in learning more about Lynn Joseph, here are some additional links: