Saludos todos! As many parts of the country recently celebrated Columbus Day, and we are quickly approaching Thanksgiving, we wanted to take the time to draw attention to a new educational campaign, Abolish Columbus Day, created by the Zinn Education Project (a project of Teaching for Change and Rethinking Schools). Teaching for Change and Rethinking Schools are both excellent resources for educators interested in multicultural teaching, diverse literature and social justice, and we’ve featured their resources many times here on the blog. This initiative aims at rethinking Columbus Day and the way in which our history remembers the genocide and continued colonial practices against the indigenous peoples in the United States and Latin America.

We are highlighting this movement and sharing these resources with you in case you may be interested in incorporating this approach in the classroom, and to ideally start a dialogue here on the blog about the ways in which historical colonization continues into the contemporary day.  The prime example of this right now is the North Dakota Access Pipeline.

The North Dakota Access Pipeline is particularly relevant to us at Vamos a Leer because many of our writers are students (like me), and have personally traveled to the region to join those peacefully protesting the pipeline’s construction, which threatens  to contaminate the Missouri river, and destroy the sacred and protected land of the Standing Rock Sioux indigenous tribe of North Dakota. This legal, moral and ideological struggle has opened up an ever-growing conversation about indigenous rights, both in history and in the present day, throughout the country. According to Teaching for Change, “Dave Archambault, chairperson of the Standing Rock Sioux Tribe, explains: ‘[I]t is a pipeline that is threatening the lives of people, lives of my tribe, as well as millions down the river. It threatens the ancestral sites that are significant to our tribe. And we never had an opportunity to express our concerns. This is a corporation that is coming forward and just bulldozing through without any concern for tribes.’” Teaching for Change states that this pattern of “bulldozing” over indigenous land and indigenous life is not new but, rather, is a societal practice that has been deeply entrenched in the history and civilization of the United States. As such, “Celebrating Columbus means celebrating colonialism, celebrating racism, celebrating genocide. It’s time that instead we paid tribute to the people who were here first, who are still here, and who are leading the struggle for a sustainable planet.”

In a New York Times op-ed piece, Dave Archambault states that the struggles that the Sioux tribe of North Dakota is facing now are not new: “It’s a familiar story in Indian Country. This is the third time that the Sioux Nation’s lands and resources have been taken without regard for tribal interests. The Sioux peoples signed treaties in 1851 and 1868. The government broke them before the ink was dry.” In the same piece, Archambault reaffirms the cause of the movement, reminding readers that it is meant to be peaceful and to protect the environmental interests of not just the Sioux tribe, and other indigenous tribes, but all people who rely on the land for their livelihood, home and sustenance:

Protecting water and our sacred places has always been at the center of our cause. The Indian encampment on the Cannonball grows daily, with nearly 90 tribes now represented. Many of us have been here before, facing the destruction of homelands and waters, as time and time again tribes were ignored when we opposed projects like the Dakota Access pipeline.

Our hand continues to be open to cooperation, and our cause is just. This fight is not just for the interests of the Standing Rock Sioux tribe, but also for those of our neighbors on the Missouri River: The ranchers and farmers and small towns who depend on the river have shown overwhelming support for our protest.

The Standing Rock protesters, who call themselves “the protectors of water,” are leading a fight representative of so many pressing social justice issues of our time, including not only indigenous rights, but also environmental rights, water rights, and, generally, the looming challenge of climate change and dwindling natural resources. 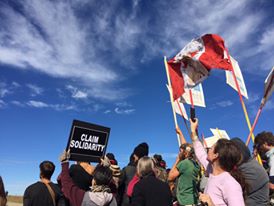 s, coincides with one of the biggest indigenous and environmental social movements of contemporary history, and the educational initiative, as well as the Standing Rock social movement, continues to gain recognition across the country. When Zinn Education Project campaign leaders were invited to speak on the Thom Hartmann radio show,  Teaching for Change executive director Deborah Menkart and high school student Daniel Ruiz talked about their ideas and goals regarding the campaign. According to Teaching for Change, where you can also find a video of the interview, “Ruiz and his classmates launched a petition to change Columbus Day to Indigenous Peoples Day in DC after his teachers used lessons from the Zinn Education Project website.” This is a perfect example of how students can be the leaders of change and educators can help empower their students by guiding them and encouraging them to find causes that they care about, and social projects that they can become active in. The Zinn Education Project website is an excellent resource for a variety of history lesson plans and teaching materials, which approach the learning and teaching of history with a moral and ethical responsibility, and a backbone value of social justice. 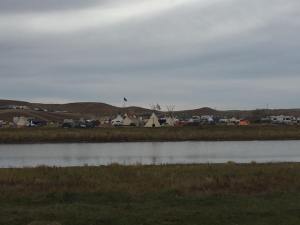 As I mentioned briefly before, this campaign and the construction of the North Dakota Pipeline has personal relevance. Several of our Latin American Studies graduate students and blog-writers, including myself, recently traveled to Standing Rock, North Dakota to volunteer our time and resources, and show solidarity with the movement. I thought I’d complement this post with some of my own impressions and observations, and also share some of the photos I took (which you can see throughout this post).

After a little over sixteen hours on the road, I and three other UNM graduate students arrived at the Standing Rock camp where we dropped off donations, mostly children’s books provided by UNM’s El Centro de la Raza, and set up our tent. We then headed to the kitchen to volunteer with cleaning up after lunch and preparing for dinner. The kitchen was in a large tent, and right next to it was another tent full of cans of vegetables that had been donated. After many minutes spent trying to open some of the cans to make vegetables for dinner, we realized that although the camp had a large supply of canned goods, they were in desperate need of quality, functioning can openers. 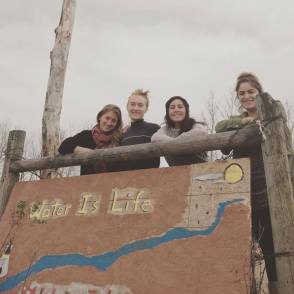 The next day we participated in two attempted direct action events, which entailed groups of volunteers and activists from the camp trying to access the construction sites in order to protest; however, all of the sites  had been blocked off, and we were unable to hold demonstrations.The next day and our last day, Saturday, the camp was woken up bright and early (actually, it was still dark), by a call on the loud speaker to head to the south camp for a prayer. The prayer ceremony eventually turned into a pre-demonstration meeting, where tribe leaders reminded everyone of the rules of peaceful protesting, and the general axiom of fighting with love and peace. From there we all climbed in our cars and drove in a line as a long caravan of tribe members, volunteers and allies, towards the construction site. At the site we got out of our cars and were instructed by tribe leaders to let the warriors, or tribe members who had been trained in peaceful protesting and were prepared to risk arrest, stand in front and lead the group. The group was at times instructed to stay back while the warriors spoke to the police, and then instructed to proceed forward. The people at the front lines held a banner that read “Water is Life, No DAPL.” We walked as a group for nearly five miles until we reached the construction site. The warriors approached the police, who had created a blockade in front of the site, to ask permission to stay and pray on the land. The rest of the group was then called forward and as a group we prayed, sang, voiced our opinions, or merely stood present in solidarity. In all, the demonstration was peaceful, non-violent, non–antagonistic, and within the bounds of the law.

I want to close by returning to my original focus: the Abolish Columbus Campaign. In an article he wrote last year for the Zinn Education Project, Rethinking Schools’ editor Bill Bigelow wrote that “we don’t have to wait for the federal government to transform Columbus Day into something more decent. Just as the climate justice movement is doing with fossil fuels, we can organize our communities and our schools to divest from Columbus. And that would be something to celebrate.” The same sentiment holds true today. The national campaign is deeply meaningful and important and we encourage you to learn more about it, but even small changes can make a significant impact. For teaching resources that encourage a more critical perspective, visit the Zinn Education Project website.

By featuring this educational initiative, and sharing some of my personal experiences, I hope to foster a discussion that incorporates current events, questions about our country’s history, the role of childhood education in social justice, and how educators and students alike can participate in causes that they believe in.

One thought on “Abolish Columbus Day”