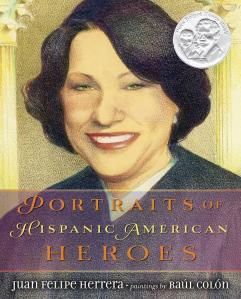 Saludos todos! Our book for this week is Portraits of Hispanic American Heroes, written by Juan Felipe Herrera and illustrated by Raúl Colón (the same illustrator from last week’s book, Tomás and the Library Lady). Portraits of Hispanic American Heroes won the Pura Belpré Honor Book award for narrative in 2015, and perfectly embodies this month’s endeavor of honoring exceptional Latinos in children’s literature, as well as in society as a whole.

Each chapter of this wonderful compilation of portraits narrates the life and work of a Latinx hero, ranging from iconic activists such as Dolores Huerta and César Chávez, to trail-blazing intellectuals such as Sonia Sotomayor and Tomás Rivera, to some of my own personal idols, such as contemporary singer Joan Baez and 1920s author Julia de Burgos.

Despite their unique backgrounds, ambitions, and accomplishments, all of these timeless figures share certain traits: courageous voices and a lasting impact on the Hispanic community. As exemplified in the chapter on Mexican-American folk singer, Joan Baez, who is known for her activism in the civil rights movements of the 60s and 70s, and her poetic, politically-charged song lyrics, these figures challenged the unfavorable odds placed against them, and blazed new trails for many to come: “One summer she picked up a ukulele, trained herself all that season, and changed her ‘sweet…thin and straight’ voice into a vibrant, magnetic cascade. ‘Powerless to change my social standing, I decided to change my voice,’ she said.”  Joan Baez ultimately used her voice, her art and her talent to spread a message of peace to areas of conflict around the world.

As noted by Publisher’s Weekly review, Portraits of Hispanic American Heroes’ biographical descriptions focus skillfully on the essence of the person’s character and drive, rather than merely outlining the historical facts: “The vignettes don’t overwhelm with dates and places, instead providing interesting snippets about the scientists, entertainers, civil rights workers, doctors, artists, politicians, educators, and judges.” In other words, each non-fictional portrait reads like a story rather than an encyclopedia entry, adding a comforting touch of informality and familiarity. The narrative style encourages readers to imaginatively enjoy the adventures and characteristics of these prominent figures, while also learning about the history of Hispanic-Americans in the United States. Although this book is best suited for ages 8-12, younger children may also enjoy the stories of these exceptional people as a read-aloud.

In an LA Review Books interview with author Juan Felipe Herrera, Daniel Olivas asks him to reflect on the underrepresentation of Latinxs in history, culture and literature. Herrera’s response shows the magnitude of this issue:

We have always wanted a democratic awareness of all of our stories — everyone, all colors, all languages, all religions, all gender identities and orientations. To tell you the truth, I was bowled over at the lack of materials — interviews, books, research — on Latin@s that have achieved great heights. So much so, that I had to make calls and interview family members and the people themselves. It is one thing to enjoy the names and the lists of amazing people and their deeds and to hear their names in the media and holiday occasions and it is quite another thing to step into deep research and find a handful of dusty volumes and a couple of glossy biographies and autobiographies. We need writers to get to the task. And we need to walk these books to the centers of educational institutions — this is what it is all about.

Herrera explains how his intensive research led him to a deeper understanding and admiration for these famous individuals, whose  pain, struggle, and ultimate perseverance became intimately apparent to him: “Border issues, citizenship, from island to mainland, fame, struggle, moments of enlightenment, ultimate transcendence — all of this floored me. I bow to all these heroes. Thank you, gracias, I say to them every day.”   Here is the essence of Herrera’s wonderful book: readers are at once stunned and moved by the impressiveness of these underrepresented and understudied heroes. Moreover, given Herrera’s accessible writing, these heroes’  everyday lives and accomplishments become simultaneously stories of lived experience, a collective conscience, and a shared heritage.

For those of you interested in using this book in the classroom and in teaching about Hispanic heritage and Hispanic historical figures, here are some additional resources: