¡Saludos, todos! This week I will be reviewing The First Tortilla, written by Rudolfo Anaya, illustrated by Amy Córdova, and translated into Spanish by Enrique R. Lamadrid (one of our professors here at UNM!). This book review will conclude our November-themed books, as next week we turn our attention to our December discussions on winter celebrations. For now, though, we are focusing on this lovely, bilingual retelling of a Mexican legend, keeping in tune with our themes of food and family, as well as indigenous traditions. This story, with stunning illustrations and an endearing female protagonist, depicts the harvest season amongst a small, Aztec tribe. Readers will revel in the old legend, while learning of the need to respect nature and its resources. For those of you avid blog-readers, this review will surely remind you of some of our previous reviews on other works by Rudolfo Anaya, and his retellings of old myths and legends.

Best suited for ages 9-13, Anaya’s work tells the fictional tale of how a young girl’s courage saves her village from a terrible drought, and introduces corn to the peoples of Mesoamerica. Ultimately, the discovery of corn also leads to the creation of “the first tortilla“. The old legend, as well as Anaya’s rendition, reminds readers and listeners of the importance in giving thanks, and appreciating the land and the sustenance that it provides.

The story begins with our young protagonist, Jade, rising to greet the sun in her small, Mexican village. Her mother is “crushing dry chile pods in a metate” while her father is “weaving a basket” to later sell in the market. The scene is set with a visual description of the village, and its surrounding area. Nearby, a large volcano representing the Mountain Spirit towers over the people and their homes. 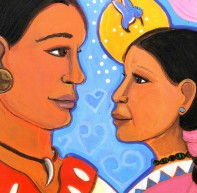 As Jade retrieves water from the lake, the reader learns of the village’s terrible and prolonged drought: “The beautiful lake was almost dry.” Many of the crops are in desperate need of water. As she continues working, a blue hummingbird comes fluttering past her ear: “‘You must go to the Mountain Spirit and ask for rain,’ the hummingbird whispered. ‘And you must take a gift’.” Jade recalls how her parents had warned her of the dangers of climbing up the steep volcano, but she also feels the weight of her village’s desperate situation, an

d is compelled to save them from the drought. As Jade is forced to make a difficult decision, she learns how to take care of her community while coexisting with the land– an important element in many indigenous cultures.

In the back of the book Anaya has included a glossary of indigenous Mexican words, such as elote, “an ancient Mexican word for ear of corn,” and rebozo, “a shawl worn by Mexican women.” Many of the words help depict the process of harvesting and cooking corn, such as metate, a “concave rock where corn is ground,” or mano, “a smooth rock with which to grind corn.” Corn was one of the most important crops amongst ancient, native peoples and, as Anaya remarks, “The cultivation of corn made it possible for the great civilizations of Mesoamerica to flourish.” Anaya even challenges readers: “How many products made from corn can you name?”

n known for frequently incorporating myth and legend in his tales for children, as some of you may remember from my review on Maya’s Children: The Story of La Llorona. While this particular story explicitly draws from the Aztec legend mentioned by Anaya in his author’s note, it also subtly references the Native American, Iroquois legend of The Three Sisters. The legend of The Three Sisters anthropomorphizes the three crops of corn, bean, and squash as three inseparable sisters who need each other in order to grow and thrive. While Jade begs the Mountain Spirit for water, because the “bean and squash are dying,” readers who are familiar with the legend may surmise that something else besides water is missing: their third sister, corn.

The legend of the three sisters has many agricultural and nutritional motives, as these three crops are symbiotic, and grow best when planted together within the same plot of land. Additionally, they each provide vital nutrients, and together offer a well-balanced diet that sustained Native Americans in North and Central America for generations and generations. According to Renee’s Garden,

Corn provides a natural pole for bean vines to climb. Beans fix nitrogen on their roots, improving the overall fertility of the plot by providing nitrogen to the following years corn. Bean vines also help stabilize the corn plants, making them less vulnerable to blowing over in the wind. Shallow-rooted squash vines become a living mulch, shading emerging weeds and preventing soil moisture from evaporating, thereby improving the overall crops chances of survival in dry years. Spiny squash plants also help discourage predators from approaching the corn and beans. The large amount of crop residue from this planting combination can be incorporated back into the soil at the end of the season, to build up the organic matter and improve its structure.

This legend not only reflects the important symbiotic relationships amongst nature’s elements, and the teleological design of the ecosystem, but also, in a more metaphorical sense, the interdependency between individuals and the community. As Jade discovers the first stalk of corn and learns how to make the first tortilla she gains knowledge and skills that will serve her tribe for generations to come.

For those of you interested in learning more about how to incorporate myth and legend into the classroom, here are a few additional links:

Stay tuned for an introduction to our December themes!