A few weeks ago the U.S. observed Columbus Day, a holiday which many have questioned. Outspoken critics have rejected the notion that Columbus ‘discovered’ America and ushered in an era of civilization, arguing instead that his arrival resulted in the domination and genocide of thousands of indigenous peoples throughout the Americas and Native Americans in the US. These critical responses led to protests, which have coalesced into sporadic policy changes throughout the US.   Some cities like Minneapolis and Seattle have replaced Columbus Day with “Indigenous Peoples Day,” and some states, like South Dakota and Hawaii, have reclaimed the holiday to honor their respective indigenous peoples. The protests continue to grow, which means that now is an opportune moment to involve your students in these critical conversations.

It can be challenging for educators who try to “rethink Columbus,” because there is a shortage of classroom material and children’s literature that tackle this issue from the perspective of indigenous peoples. Too few of our textbooks and novels ever address the other side of the narrative – who was it whom Columbus encountered? The voices of the Taino, the people who first greeted Columbus, are never told. I would wager that many have never even heard of the Taino people, which is shocking given the pervasiveness of Columbus’ version of history.

That is why this week I present t 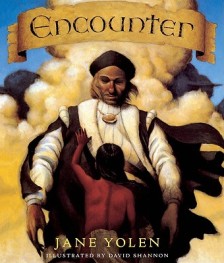 o you a children’s book that tells a different story of the arrival of Columbus: Encounter (ages 6-12), written by Jane Yolen and illustrated by David Shannon, is told from the fictionalized perspective of a boy who was part of the Taino, the first tribe to have interacted with Columbus.

“When Christopher Columbus landed on the island of San Salvador in 1492, what he discovered were the Taino Indians. Told from a young Taino boy’s point of view, this is a story of how the boy tried to warn his people against welcoming the strangers, who seemed more interested in golden ornaments than friendship. Years later the boy, now an old man, looks back at the destruction of his people and their culture by the colonizers”.

On her website, the author, Jane Yolen, recounts how she wrote the book at the request of publisher as part of the celebrations for the quincentenary of Columbus’ arrival. She noted that “the book was the only one in that anniversary year to speak for the Taino people in a picture book edition.” Not much has changed since she wrote it back in 1994. Even as we scoured the web for appropriate resources to share with you now, ten years later, Encounter is still the only book that provides this narrative to young readers.

Perhaps this is, in part, becau 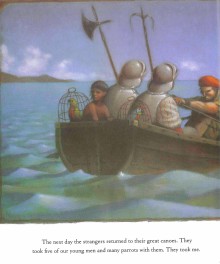 se it is a hard narrative to share with young readers. The book has a somber tone and dark illustrations, suiting the grim story which it recounts. Readers learn about the encounter from the perspective of a young boy whose prescient nightmares prepare him for the misleading and abusive interactions between his people and the invading Europeans. The boy is taken away f 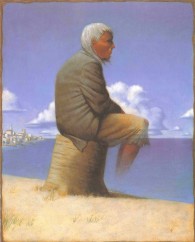 rom his village, but eventually escapes from the Europeans. He grows into an elderly man who is able to tell the story of Columbus and use it as a warning to all the children and people in every land. This is what makes the book so unique among other accounts of Christopher Columbus — for once, the Taino people are not faceless, voiceless victims. We hear the story from their side.

Albeit solemnn, the book does have its lighter moments, such as in the following passage in which Yolen explains how the Taino people tried to befriend Columbus and his men: 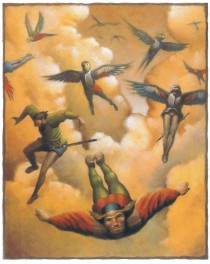 “Our chief gave the strangers balls of cotton thread to bind thus to us in friendship. He gave them spears that they might fish and not starve. He gave them gum-rubber balls for sport. He gave them parrots, too-which made our young men laugh behind their hands all over again, knowing it was our chief’s little joke, that the strangers looked like parrots.”

Those who do not support celebrating Columbus Day point out the exploitation and suffering of the native people that resulted from Columbus’ arrival, as well as the misconception that the explorer ‘discovered’ the Americas. The title of this book therefore works to help students re-evaluate how the arrival of the Europeans in 1492 impacted the people who had been living there for centuries.

Though this book can be a great tool to help tell an alternative narrative about Christopher Columbus, we nonetheless concede that it is not perfect. Unfortunately, the narrative offers a sense of finality of the Taino peoples – mistakenly suggesting that were completely annihilated. This viewpoint is a common misconception, one held for a long time by many in mainstream culture. Yet not only is it untrue, it does an outright injustice to the Taino people who still exist today. They were far more resilient than the textbooks allow. In fact, the Taino people, like many indigenous communities, are currently revitalizing their culture.

It would be inspiring to have children’s literature which not only reveal the truth behind the hardships suffered by indigenous peoples from the arrival of Europeans, but which also pay attention to the ways in which contemporary indigenous peoples continue to fight for better living conditions as well as to preserve and reinvigorate their cultures. This is where educators can not only broaden, but deepen this conversation. Engage your students and colleagues around these questions. Ask them to consider the whole timeline; encourage them to “rethink Columbus” in as many ways as is possible. How does his encounter continue to impact lives today?

To help you in this process, we’ve found a few resources: