Last week I reviewed a book that touches upon the issue of losing a loved one. This week I present a book that can be used to introduce the issue of death to children in a light and playful way. Given that it also includes imagery related to Día de los Muertos and celebrates Mexican traditions, it’s a great addition to your classroom discussions about this holiday. An Américas Award winner in 2003 and Pura Belpré Award winner in 2004, Just A Minute!: A Trickster Tale and Counting Book, (ages 4-8) written and illustrated by Yuyi Morales, is a wonderful book that mixes multicultural literature with bilingual elements and math.

“In this original trickster tale, Señor Calavera arrives unexpectedly at Grandma Beetle’s door. He requests that she leave with him right away. “Just a minute,” Grandma Beetle tells him. She still has one house to sweep, two pots of tea to boil, three pounds of corn to make into tortillas — and that’s just the start! Using both Spanish and English words to tally the party preparations, Grandma Beetle cleverly delays her trip and spends her birthday with a table full of grandchildren and her surprise guest. This spirited tribute to the rich traditions of Mexican culture is the perfect introduction to counting in both English and Spanish. The vivacious illustrations and universal depiction of a family celebration are sure to be adored by young readers everywhere.”

The story begins with Señor Calavera knocking on Grandma Beetle’s door, and telling her it is time for her to come along with him. Grandma Beetle says “Just a Minute, I will go with you right away, I have just one house to sweep.” This phrase is repeated as she incrementally prepares for a celebration. She has two pots of tea to boil, three pounds of corn to make into tortillas, four fruits to slice, and on and on. This repeated format includes the Spanish translations for the numbers as Señor Calavera counts the objects. 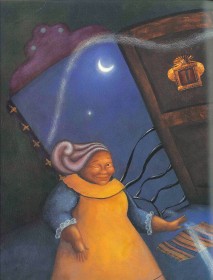 The illustrations are made up of bold, vivid colors and include interactive elements that children will enjoy, such as spotting the little black and white kitten found on each page. Though the bilingual aspect is minimal (the only words in Spanish are the numbers 1-10), it is still a great tool to teach children how to count in Spanish. It also effectively reflects Mexican culture through the depictions of Señor Calavara, the foods, piñatas, and birthday celebration.

The book is a useful tool for introducing Día de los Muertos to young readers. In a purely visual sense, Señor Calavera mimics the traditional, whimsical skeletal figures often created to accompany the holiday, and the vibrant colors draw upon Mexican culture. More conceptually, Grandma Beetles’ celebratory interaction with death reflects the revelry that marks Día de los Muertos customs. These visual and textual elements thus make this title a great selection for teaching children about the holiday and getting them to acknowledge death in a lighthearted way.

Check out the amusing sequel to this book, Just In Case: A Trickster Tale and Spanish Alphabet Book, in which Señor Calavara comes back for another of Grandma Beetle’s birthday parties and labors over finding her a suitable gift.

If you plan on using this book with your students, there are a number of helpful resources:

7 thoughts on “¡Mira, Look!: Just A Minute!: A Trickster Tale and Counting Book”