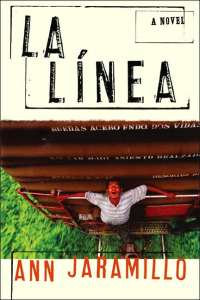 Miguel’s life is just beginning. Or so he thinks. Fifteen-year-old Miguel leaves his rancho deep in Mexico to migrate to California across la línea, the border, in a debut novel of life-changing, cliff-hanging moments. But Miguel’s carefully laid plans change suddenly when his younger sister Elena stows away and follows him. Together, Miguel and Elena endure hardships and danger on their journey of desperation and desire, loyalty and betrayal. An epilogue, set ten years after the events of the story, shows that you can’t always count on dreams–even the ones that come true.

La Línea is about the journey of two young teenagers trying to cross the U.S.-Mexico border to be reunited with their family in California.  It’s an incredibly poignant and moving novel.  The trip North is hard for Miguel and Elena, and it’s not always easy to read about what the two had to endure.  I certainly cried through a number of parts.  It’s difficult to read about how dehumanizing and traumatic the experience is.  While it’s fiction, it’s based on the lived experiences of some of Jaramillo’s own students.  Knowing how close the story is to the accounts of many immigrants makes the reading even more intense.  Jaramillo manages to communicate the danger, violence, and sacrifice while avoiding overdramatizing the emotions, which allows the story to remain accessible both to students who have had similar experiences as well as those who haven’t.

While it’s certainly a realistic account, there are times when I can imagine that Miguel and Elena were luckier than many in terms of the people they encountered, like Javi and Moíses, who led to their ultimate success in making it to the U.S.  They met people who sacrificed their own lives so that the two teenagers would make it to their families in the U.S.  Yet the story is not overly romanticized, by any means.  Even though Elena and Miguel survive the journey, they lose a great deal.  Such an experience can’t be forgotten; my guess is it forever changes a person.  It’s one that perhaps you never fully recover from.  When we consider the fact that some of our own students may have experienced the same thing, we realize how important a book like this is.

The novel puts a very human face on immigration.  It’s a counter story to the narratives that incite fear of immigrants by painting them as terrorists, drug dealers, or criminals.  Instead we see the financial desperation that forces people to risk everything, including their own lives and the lives of their families, to make it to the U.S.  We see how poverty forces parents to leave children behind to find work in the U.S., and the emotional strain this puts on the entire family.  When used in the classroom, the book can raise awareness and hopefully empathy for the risks so many immigrants take when they try and cross the border.   For those students whose families have experienced crossing the border, the book provides protagonists with whom they can identify, and the space to discuss what is an often silenced experience.

The documentary Which Way Home would be an excellent complement to the film, with a free teacher’s guide available for the film.

If you’d like to read what others have thought about the book, check out the links to other reviews below:

The book has been selected as part of the AILF’s “Immigration Resource Guide for K-12 Educators.”

I’m not alone in thinking it’s a book that should be on our classroom and library shelves. La Linea has been given a number of awards and recognitions: Florida Sunshine State Young Readers Award Master List, James Cook Book Award Nominee (2007), ALA Best Books for Young Adults (2007), ALA Popular Paperbacks for Young Adults (2010), Young Hoosier Book Award Nominee (2008-2009), Texas Lone Star Book (2007-2008).

Click here to be taken to our Educator’s Guide for the book.