This week I am delighted to present a children’s book unlike many others. Marisol McDonald Doesn’t Match / Marisol McDonald no combina (Ages 4-8), written by Monica Brown and illustrated by Sara Palacios, is a bilingual book about a young girl who isn’t afraid to be herself. The book celebrates her individuality and ethnic diversity, and would be a great addition to any classroom.

“My name is Marisol McDonald, and I don’t match. At least, that’s what everyone tells me.” Marisol McDonald has flaming red hair and nut-brown skin. Polka dots and stripes are her favorite combination. She prefers peanut butter and jelly burritos in her lunch box. And don’t even think of asking her to choose one or the other activity at recess–she’ll just be a soccer playing pirate princess, thank you very much. To Marisol McDonald, these seemingly mismatched things make perfect sense together. Unfortunately, they don’t always make sense to everyone else. Other people wrinkle their nose in confusion at Marisol–can’t she just be one or the other? Try as she might, in a world where everyone tries to put this biracial, Peruvian-Scottish-American girl into a box, Marisol McDonald doesn’t match. And that’s just fine with her. A mestiza Peruvian American of European, Jewish, and Amerindian heritage, renowned author Monica Brown wrote this lively story to bring her own experience of being mismatched to life. Her buoyant prose is perfectly matched by Sara Palacios’ engaging acrylic illustrations.

After being taunted for her appearance and her eclectic way of playing, Marisol goes through a moment of doubt and concedes to wearing clothes that match and doing other “normal” activities. The book teaches a great lesson by showing that Marisol isn’t happy being like everyone else, and with the help of her teacher who encourages her to be herself, Marisol regains her pride and confidence in being unique. 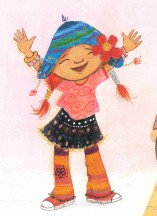 I found this book to be particularly special as Marisol is Peruvian-Scottish American, like myself. As a child I never came across a book like this one, with a protagonist that represented me and my experiences with identity. This is why this book is a great example of multicultural teaching and a much needed story in a world where children don’t often see themselves reflected in the books they read. It allows for minority and ethnically mixed students to feel a personal connection with the protagonist, and furthermore, ideally, to be inspired by Marisol’s confidence in being unique.

The book is mostly split with English on one page and Spanish on the opposite, but it also includes dialogue with both languages interlaced, thus representing the very real way in which bilingual families may integrate Spanish with English when speaking at home. The book includes references to images representative of Peru, Marisol’s mother’s birth country, including ceramics, llamas, and Marisol’s favorite hat-a chullo.

Looking at the Peruvian ceramic pitcher in the image to the left, we see how illustrator Sara Palacios uses a mixed media technique of acrylic and newspaper collage that adds dimension, character, and creativity to the pages, artistic themes also reflected in the themes of the book!

Here is a quote from Brown from an  NBC Latino article about her upcoming and third title in the series:

“I’m so excited about my new Marisol book — that original book was the hardest to get published, but it got the 2012 International Latino Book Award, a Pura Belpré Honor for Illustration and was voted a notable book by the ALSC,” says Brown who, like the fictional Marisol, grew up bicultural. “There’s a lot of pressure for kids to fit in and be popular, and I really hope my books affirm the hearts and minds of the children who don’t fit in one box, and I really want to celebrate the uniqueness of all children and let them know it’s okay to be yourself.”

Finally, if you’re interested, check out this  NPR interview with Monica Brown in which she talks about many aspects of the book series, including its bilingual nature, character creation, publishing obstacles, and more.

Stay tuned for upcoming ¡Mira, Look! posts. Next week and throughout the month of October we will present reviews of children’s books for Día de los Muertos!