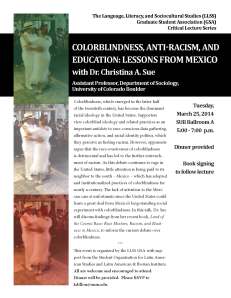 Join the Graduate Student Association of Language, Literacy and Sociocultural Studies, the Latin American and Iberian Institute and the Student Organization of Latin American Studies for a special lecture with Dr. Christina A. Sue on Tuesday March 25th from 5:00-7:00 pm at the University of New Mexico, Student Union Building, Ballroom A.

Dr. Sue is currently an assistant professor in the Department of Sociology at the University of Colorado Boulder.  Her talk, “Colorblindness, Anti-Racism, and Education: Lessons from Mexico,” will explore a number of important themes and questions relevant to both our teacher education programs and k-12 classrooms.

Colorblindness, which emerged in the latter half of the twentieth century, has become the dominant racial ideology in the United States. Supporters view colorblind ideology and related practices as an important antidote to race-conscious data gathering, affirmative action, and racial identity politics, which they perceive as fueling racism. However, opponents argue that the race-evasiveness of colorblindness is detrimental and has led to the further entrenchment of racism. As this debate continues to rage in the United States, little attention is being paid to its neighbor to the south – Mexico – which has adopted and institutionalized practices of colorblindness for nearly a century. The lack of attention to the Mexican case is unfortunate since the United States could learn a great deal from Mexico’s long-standing social experiment with colorblindness. In this talk, Dr. Sue will discuss findings from her recent book, Land of the Cosmic Race: Race Mixture, Racism, and Blackness in Mexico, to inform the current debate over colorblindness.  A book signing will follow her lecture.

It looks like it will be a great lecture and discussion for our local community. Dinner will be provided.  Please RSVP to kdillon@unm.edu.

I hope to see you there!