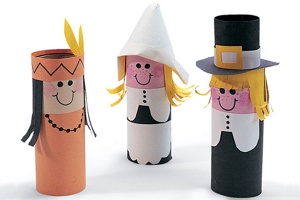 While Thanksgiving itself may not have a great deal of explicit Latin American content, it’s still an important topic for us here at Vamos a Leer.  Many of the issues surrounding Thanksgiving, like the discourses used to present it in schools, are quite similar to the discussions that arise out of how to teach about conquest and colonization, multicultural education, and cultural representations, which are all topics of importance at Vamos a Leer.  So for the next few weeks, we’ll be sharing resources and ideas for how to offer a different account than the standard Thanksgiving story.

Often when the topic of Rethinking Thanksgiving is broached, many respond with accusations that we’re trying to take the fun out of schools or holidays, we’re thinking about it too much, we’re being too politically correct, or we’re just making students feel guilty about who they are.  Of course, none of these are the intention, and I don’t believe that they are even the necessary outcome of offering a more historically accurate version of Thanksgiving.  As James Loewen wrote, “The antidote to feel-good history is not feel-bad history, but honest and inclusive history” (Rethinking Columbus, p. 80).   Presenting a mythologized version of history or a ‘feel-good’ history only works until our students find out the truth.  How do they feel once they realize they’ve been lied to? Or what about our students who already know that the stories of Pilgrims and Indians peacefully celebrating a First Thanksgiving are a lie? What about our Native American students who live out the reality of what it’s like to be Native in the United States? How do they feel when forced to dress up in construction paper costumes of Pilgrims and Indians?  A quick Google Search shows that these ‘historical’ re-enactments of the first meal are still quite prevalent.  In classrooms across the United States students still dress up in costumes quite similar to the craft pictured above.

The following resources are all great places to start in planning a unit that rethinks our traditional notions of Thanksgiving.

For those of you who’ve already covered topics like Christopher Columbus, exploration, colonization or conquest in the Americas this is a chance to return to those conversations and dialogues.  If you haven’t had the chance to teach about these things yet, this month would be the perfect time to bring them into the classroom.  It’s also a great opportunity to begin (or continue) to encourage students to unpack common stereotypes about people and cultures.

Just this week, Allison, one of the wonderful teachers we work with, shared an activity she uses to teach about stereotypes.  I thought I’d share it here as it would be a great way to begin a conversation around rethinking Thanksgiving. She started by asking students to write out any adjectives or descriptions that came to mind when they thought of the word Indian.  Some of their responses were common negative stereotypes.  As the majority of her class is Mexican-American, she then asked them to think of the common ways they were described or heard people describing them.  Once they’d discussed how many of those descriptions were incorrect, they then created a poster.  The poster had  a picture of a Mexican-American at the center and underneath said “Just because I’m Mexican-American doesn’t mean________”  Students then provided various answers that would fill in the blank.  Having completed the first part of the activity, students then moved on to an expanded version.  Working in small groups, students moved around the classroom looking at different posters that had been prepared.  Each poster had an image of a different cultural group or race with “Just because I’m (culture or race) doesn’t mean I’m (stereotype).  After discussing the image, students then wrote the stereotypes they’d heard about the people group.

I hope we’ve provided some resources that will be helpful to you in the coming weeks.  Feel free to share any other ideas in the comments section below. Next week’s En la Clase will focus on different fiction and non-fiction books to help students rethink Thanksgiving.