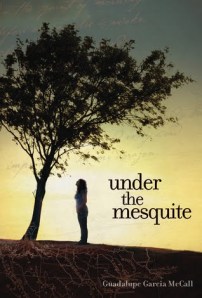 Lupita, a budding actor and poet in a close-knit Mexican American immigrant family, comes of age as she struggles with adult responsibilities during her mother’s battle with cancer in this young adult novel in verse.

When Lupita learns Mami has cancer, she is terrified by the possibility of losing her mother, the anchor of her close-knit family. Suddenly, being a high school student, starring in a play, and dealing with friends who don’t always understand, become less important than doing whatever she can to save Mami’s life.

While her father cares for Mami at an out-of-town clinic, Lupita takes charge of her seven younger siblings. As Lupita struggles to keep the family afloat, she takes refuge in the shade of a mesquite tree, where she escapes the chaos at home to write. Forced to face her limitations in the midst of overwhelming changes and losses, Lupita rediscovers her voice and finds healing in the power of words.

Told with honest emotion in evocative free verse, Lupita’s journey toward hope is captured in moments that are alternately warm and poignant. Under the Mesquite is an empowering story about testing family bonds and the strength of a young woman navigating pain and hardship with surprising resilience.

Under the Mesquite is a beautiful book.  While it was a quick read, it lingered in my mind.  I found myself continuing to think about it days after I’d finished it.  It’s a book that is certainly worth a second (or even third) read.  The first time through I was engrossed in the story, only subconsciously aware of the beauty and simplicity of McCall’s verse. When I returned to the  novel later, I found myself incredibly moved by the imagery and sentiments conveyed through McCall’s words.  I think Lyn Miller-Lachmann describes it best in her own review: “. . .one of the most achingly beautiful novels I’ve read in a long time. It is a story from the heart, not written to fit into a marketing category but to remember, to honor, and to bear witness.”

As many of you may already know, one of my favorite reads from the past year was

Sammy & Juliana in Hollywood by Benjamin Alire Sáenz.  To borrow Lachmann’s words, it too, was achingly beautiful.  I found myself reminded of Sammy & Juliana as I read Under the Mesquite.  Both are poignant coming of age stories that refuse to sugar-coat the reality of their protagonists who have to grow up too quickly, shouldering responsibilities not meant for teenagers.  Like Sammy, Lupita is strong–she struggles, but she is resilient.  Often times our students learn too early that life isn’t always fair, much like Lupita.  Unfortunately, they’re not always given the support or the knowledge to deal with it. Under the Mesquite offers an example of how to not only survive, but to eventually thrive.  An important symbol throughout the story is the mesquite tree.  No matter how hard Mami tries, she can’t seem to get rid of the mesquite growing in her rose garden.  Yet, by the end of the story, the mesquite has come to represent Lupita as she writes,

I agree, but it isn’t its beauty
that strikes me.  I envy the mesquite
its undaunted spirit, its ability to turn
even a disabling pruning
into an unexpected opportunity
to veer in a different direction,
flourishing more profusely than before (p. 141).

Lupita’s strength doesn’t just show in how she deals with the death of her mother, but also in how she navigates the difficult waters of identity.  Lupita must struggle to determine for herself what it means to be a Mexican and a woman.  When Lupita becomes involved in drama, her teacher Mr. Cortés, suggests that they must work on getting rid of her Spanish accent.  Yet, when Lupita does this, her identity as a Mexican is questioned by her closest friends:

But Lupita doesn’t let others define her identity.  Instead, she responds,

Being Mexican
means more than that.
It means being there for each other.
It’s togetherness, like a familia.
We should be helping one another,
not trying to bring them down.
. . . I’m not acting white! I want to shout
after my so-called friends.
I couldn’t be more Mexican
if you stamped a cactus on my forehead (p. 83).

One of my favorite poetry sections is “señorita” where Lupita describes the various ways her family members and friends define the significance of señorita. Lupita must grapple with what it means for her, and the conclusions she arrives at reveal the ways in which Lupita has realized she must grown up.  For Lupita, a señorita

. . .is the end of wild laughter.
The end of chewing bubble gum
and giggling over nothing
with my friends at the movies, our feet up
on the backs of the theater seats.
. . .I’m trying my best
to be a good daughter and accept
the clipping of my wings,
the taming of my heart.
. . .Señorita is a niña,
the girl I used to be,
who has lost her voice (p. 77).

By the end of the story, the reader has experienced all four years of high school with Lupita.  We see Lupita struggle to define herself as she deals the harsh realities of life, and we get to see her begin to heal and move on a stronger person.  This is one of the reasons I think Lupita is such a powerful protagonist for our students.  Lupita doesn’t let the struggle defeat her:

. . .at last I feel something unfurl within me.
Like a shoot growing from what remains–a tiny piece
of buried mesquite root–
determination flourishes (p. 194).

I’m not alone in thinking Under the Mesquite is an amazing book–it is the winner of the 2012 Pura Belpré Author Medal, the 2012 William C. Morris Debut Award Finalist, and the 2013 Tomás Rivera Children’s Book Award. I hope you’ll consider adding it to your classroom library.  Click here to be taken to our Educator’s Guide for the book.

If you’d like to read what others have thought about the book check out the links to other reviews below:

If you’re an Albuquerque local I hope you’ll join us tonight at Bookworks from 5-7 for some coffee and conversation about Under the Mesquite!

8 thoughts on “Book Review: Under the Mesquite”