As many of you know, in January I made a resolution to read more books by and about Latinos.  As part of this resolution, I made a list of books that I’d like to read this year.  While I realize that I won’t have time to write full reviews of all of those books, I’d like to be able to at least offer my reflections on those books, so I’ve created a new category of posts: TBR Reflections and Reviews.  As with our other reviews, these won’t necessarily be standard book reviews, but written with teachers or educators in mind, discussing the books in terms of why or how one might implement them in a classroom and what they could offer students.  Each time I write a post in this category, I’ll link it to the book title included in my TBR list, so that original post will be updated throughout the year.

Rights Movement and Black History through a Latino lens–offering ways that these intersect and overlap.  With this in mind, I decided to read Darkroom: a memoir in black & white written by Lila Quintero Weaver (254 pages, published in 2012 by University of Alabama Press).  The premise of the book was quite interesting to me.  The book jacket offers the following description:

“Darkroom: A Memoir in Black and White is an arresting and moving personal story about childhood, race, and identity in the American South, rendered in stunning illustrations by the author, Lila Quintero Weaver.

In 1961, when Lila was five, she and her family emigrated from Buenos Aires, Argentina, to Marion, Alabama, in the heart of Alabama’s Black Belt. As educated, middle-class Latino immigrants in a region that was defined by segregation, the Quinteros occupied a privileged vantage from which to view the racially charged culture they inhabited. Weaver and her family were firsthand witnesses to key moments in the civil rights movement. But Darkroom is her personal story as well: chronicling what it was like being a Latina girl in the Jim Crow South, trying to understand both a foreign country and the horrors of our nation’s race relations. Weaver, who was neither black nor white, observed very early on the inequalities in the American culture, with its blonde and blue-eyed feminine ideal. Throughout her life, Lila has struggled to find her place in this society and fought against the discrimination around her.”

Imagine my surprise when I got a copy of the book and realized it was a graphic novel!  While a quick flip through the book revealed beautiful pictures, I have to admit, I was slightly disappointed–I had expected something quite different.  My hesitancy about the book was short-lived though.  As soon as I started it, I was hooked.  While it was a quick read, I finished it in one sitting in less than an hour and a half, it was incredibly thought provoking.  Weaver touches on a number of important themes: race in Latin America, racial segregation in the south, Jim Crow laws, identity development of a young bilingual Latina, and education in the U.S.  Any of these could have been developed into its own book, and other reviews have been somewhat critical of a lack of cohesion because of the multiple themes.  I don’t necessarily see this as a negative, especially when thinking about non-adult readers.  In fact, in some ways I think it is a positive.  Her book offers enough to give students an idea of the multiple themes and issues relevant to that historical time period (and even some today), perhaps planting seeds to get students interested in pursuing a particular idea in further depth.  One reviewer likened the book to a primer on the Civil Rights Movement, I’d disagree though. I think it has the potential to be so much more powerful than that.  Written from Weaver’s perspective as she grew up in Alabama, anyone from an older elementary school student to a high school student could relate to Weaver’s experiences. I also think the graphic novel genre has the ability to appeal to and engage many students who might be turned off by the textbook or primer like readings we often offer them when we teach about the Civil Rights Movement or race relations in the United States.

This is the second memoir I’ve read this month (more on Glorytown: One Boy’s Struggle Under Castro coming later this month).  What’s interesting to me are the similar themes in both on what it meant to be an American.  In both, to be an American is to be white.  Look at the following pages from Weaver’s book: 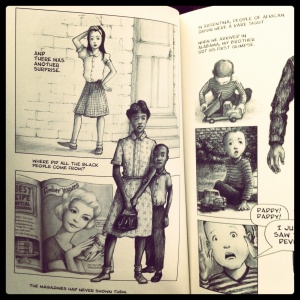 Not only does she find her conceptions on what it meant to be an American challenged, but also her own identity–she struggled to accept who she was.  Early on she was ashamed for anyone to know that her first language was Spanish.  She worked hard to keep her school and home life separate–in part because she feared her parents would be critical of the education she was getting.  At one point in the story Weaver writes about her father’s views on education in the U.S, “According to him, my teachers let us play too much.  They softballed tough subjects.  They relied on gimmicks rather than books.  And as far as he was concerned, there were far too many: class parties, costume pageants, salt and flour maps and other bogus projects.  School in the United States was too easy!” (pg. 120-121).  All important and interesting topics to be considered in our classrooms

Her descriptions of the struggles and violence during the Civil Rights Movement are quite moving–lacking the blood and gore that might make them inappropriate to share with younger children–they still communicate the gravity of what happened.  Her illustrations of the night Jimmy Lee Jackson was shot and his subsequent death that inspired the march from Selma to Montgomery are excellent.

While I think the book would be an excellent addition to any school or classroom library, I’m not entirely sure the best way to implement it in a classroom.  It could certainly be used as individual reading or research for a class project.  It may work as a read-aloud, especially if using with older elementary school students, as long as everyone could easily see the illustrations, as they are an essential piece of the book.
Check out the links below for other reviews of the book:
If you’re familiar with the book, please feel free to share your own thoughts! I’d also love to hear about any other similarly themed graphic novels, as this is a somewhat new topic for me!
–Katrina
Good for: Good for: Gathering Books AWB Challenge (2013 Notable Books for a Global Society book award) and My Overstuffed Bookshelf YA Reading Challenge

8 thoughts on “TBR Reflections and Reviews~Darkroom: a memoir in black and white”