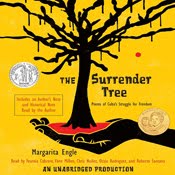 The Surrender Tree is a unique novel, both for its content and its style.  It tells the story of an often overlooked or overshadowed period in early Cuban history when the country was embroiled in three different wars for independence between 1868-1898.  In an unexpected move, the author, Margarita Engle, chooses to tell the story in verse form.  Now, I have to admit to some hesitancy and a little bit of dread when I realized the novel was written in free verse.  Yet, I was captivated by the story almost immediately, finishing it in an afternoon.

Part of my initial hesitancy stemmed from the difficulty I imagined would present itself for a teacher using a verse novel in the classroom—unfortunately, for many students poetry can be difficult and intimidating.  Yet, I soon realized that Engle’s use of verse to tell the story was actually quite brilliant.   The verse form serves to make the story much more accessible to young adult readers.  For one, the pages aren’t visually overwhelming.  Each page is devoted to one poem told from one person’s point of view.  This also makes the story easy to follow and the characters easy to track, students always know who is speaking. All of this creates a superficial simplicity that allows students to become easily engaged in a more complex narrative experience.  Once engaged, students can take in the story of Rosa, the freed slave who worked to heal the injured in all three of Cuba’s wars for independence.  They see everything unfold as Engle’s writing paints vibrant pictures of what life was like during this historical period.  They are introduced to Cuban slavery, pre World War II concentration camps, and early U.S. involvement in Cuba.

Some have critiqued the novel for leaving the reader feeling incomplete, others for the seeming fading in and out of characters, with no real closure or explanation.  While, I didn’t particularly feel that way, I have to wonder if any sense of incompleteness was intentional.  It’s a story of a country torn apart by three different wars for independence over a period of 30 years. Lives are lost and people disappear, uprooted by the fighting and war, often times closure is never found. And, in fact, I don’t think Cuba found closure at the end of the last war.  Despite 30 years of war, the Cuban flag could still not be flown.  In the words of José—“We can only watch from far away/ as the Spanish flag is lowered/ and the American flag glides upward./ Our Cuban flag/ is still forbidden” (p. 156).

While it may not be a book most students would pick up on their own, I think many students would really like it if it was used in the classroom.  For teachers, it’s an opportunity to introduce students to novels written in verse.  It allows students a more sustained period of time to get comfortable reading in verse that poems often don’t. The novel could quite easily be converted to a Reader’s Theatre activity, having individual students ‘act out’ the parts by reading a specific character’s poems.  The content is engaging—at times the descriptions offered are gruesome—all the more interesting to students because it is a story based upon real events and real people.

For more on using The Surrender Tree in your classroom check out our Educator Guides section for lesson plans and activities.

3 thoughts on “Book Review: The Surrender Tree: Poems of Cuba’s Struggle for Freedom”